V International Congress On Biodiversity Of The Guiana Shield
http://www.biodiversityguyana.org/ibg2019congress/

The Guiana Shield: A Strategic Ecosystem For Resilience Against Climate Change

Organized by the Universidad de la Amazonia together with the Colombian Chapter of the International Society of Biodiversity of the Guiana shield.
Information including registration (in spanish for each language please use google translate):
https://www.udla.edu.co/documentos/docs/Departamento%20de%20Mercadeo/Eventos/2019/Terminos%20de%20Referencia%20V%20Congreso%20Internacional%20de%20Biodiversidad%20del%20Escudo%20Guayanes.pdf
Context
Economic development is gaining importance in the Guiana shield resulting in anthropogenic pressure on natural resources and reduction of the quantity and quality of ecological habitats.

Objective
Identify the impacts on economic development in the Guiana shield on biodiversity and living in harmony with nature.
Publicado por IBG-Society en 16:50 No hay comentarios:

The V IBG Congress is being organized in Colombia for the period, August 8-12, 2016.
Abstracts for poster and paper presentations can already be submitted.

Abstracts Can Be Submitted In Spanish, English, Portuguese or French

Abstracts can be in Spanish, English or French and must not exceed 250 words written in Microsoft Word, Times New Roman, font 12 with the title in capital and bold, font 14.

Acceptance of abstracts will be communicated in the month of March 2019.

The first draft of accepted papers must be sent until 30 April 2019
Deadline for presentation of complete articles is 30 June 2019.

The IV IBG Congress is being organized in Guyana for the period, August 8-12, 2016. Abstracts for poster and paper presentations can already be submitted.

Overall Objective of the IV IBG Congress
To foster and develop education and research in all disciplines contributing to the knowledge and stewardship of the biodiversity of the Guiana Shield and the conservation, preservation, and sustainable management of its natural, rural and urban ecosystems.

Theme and sub-themes
The theme for the IV International Congress on Biodiversity of the Guiana Shield, August 8-12, 2016 is:


The following sub-themes are identified for presentations (paper and posters);

Submission
Abstracts should be submitted preferably in English, but can also be submitted in Portuguese, Spanish or French. Abstracts should not exceed 250 words, written in Microsoft Word, Times New Roman, font size 12 with the title in bold upper case, font size 14. Abstracts that may not fit a particular subtheme, but are related to the main theme can be submitted. Deadline for the submission of Abstracts is 29th February 2016. If abstracts are accepted and approved, the deadline for the Full Paper will be 15th June, 2016.
Kindly submit abstracts to the following address: editorial-ibg2016@biodiversityguyana.org
Congress Logistics


Information about registration, registration fees, accommodation, transportation, venues and the Congress programme will be posted and updated on the IV IBG Congress 2016 website www.biodiversityguyana.org/ibg2016congress/ from 10th October 2015

You can download the full description of the call for papers in English, Spanish, Portuguese, Dutch and French here.
Publicado por IBG-Society en 6:12 24 comentarios:

The purpose of the Foundation is to execute all decisions of the IBG and to function as its administrative agency. This may include :
a. Keeping records of the membership of the IBG and all related administrative functions, including proper bookkeeping;
b. The organization of the General Assembly of the IBG;
c. The organization of the International Congress on Biodiversity of the Guiana Shield;
d. The organization of special symposia, seminars, courses and workshops;
e. The development of projects, especially in the areas of research and academia;
f. Fundraising for proposed seminars, courses, workshops, projects and other events;
g. Dissemination of knowledge produced by the IBG
h. Establishing and maintaining a website for the IBG;
i. Developing and maintaining relations with organizations that may promote the goals of the IBG;

The Foundation will take all necessary actions to incorporate the IBG as an association under the laws of Suriname.

Aims and Scope of the IBG

Membership and Dues
1. Membership Categories: The six categories of membership are: standard, life, associate, emeritus, student, and honorary.
(a) Standard members pay full dues to the society, can vote at the General Assesmbly, and can be IBG Officers or Directors.
(b) Life members are individuals who have made a substantial, one-time financial contribution to IBG equal to at least 50 times the prevailing, annual membership dues and thereafter need not pay annual dues. Life members have the same privileges as standard members.
(c) Associate members are individuals representing a scientific institute, society, government agency, non-government organization, community organization, or corporation as a delegate to the General Assembly. Each institute, society, agency, NGO, community organization, or corporation can be represented by only one voting delegate at the General Assembly, but any person associated with those groups may join IBG as an individual member. Associate members are eligible to be Directors but may not be IBG Officers.
(d) Emeritus members must be nominated by a Representative of the Board of Directors and approved by the Board of Directors. They must be accomplished researchers studying the biodiversity of the Guiana Shield who: (i) are no longer employed full-time professionally; and (ii) have ten years of association as a standard or life member with IBG, or its predecessor (the meetings that gave origin to the Conferences of Biodiversity of the Guiana Shield).
(e) Student members are individuals who are currently full-time students at universities working toward graduate or undergraduate degrees. Student membership is limited to 5 years and requires evidence of full-time enrollment. Student members cannot serve in a voting capacity on the Board of Directors but can be ex officio members, if so designated by the Board. However, student members can serve in a voting capacity on other Society committees, if appointed by the Board of Directors, and can vote in the General Assembly.
(f) Honorary members are individuals proposed to the Board of Directors by any member and approved by the Board. Honorary members may vote in the General Assembly but cannot serve as Directors unless they also maintain another membership category.
2. Dues: Membership dues will be determined by the Board of Directors.
(a) Annual dues are payable by January 1 of each year to the IBG Treasurer via the Country or International Chapter Representatives of the Board of Directors.
(b) Only members who have paid required dues by the date of the Conference General Assembly (or by January 1 in years with no general assembly) are eligible to vote. Members who are more than one year in arrears of their dues cannot participate in other IBG activities.
(c) Standard and Associate members pay full dues, as listed below, and periodically modified by the Board of Directors. Emeritus and honorary members are not required to pay dues. Dues for student members will be set at 40 to 50% of the annual rate for standard members from their countries.
(e) Dues for members beginning January 1, 2011 will be (in U.S. dollars) and paid in national money using the exchange rate to the local Country Chapter or the International Chapter Representatives of the Board of Directors:
$ 50 Annually for standard members;
$ 25 Annually for standard members from the IBG-designated economically less income country;
$ 100 Annually for associate members;
$ 25 Annually for student members;
$ 10 Annually for student members from an IBG-designated economically less income country;
$ 0 Annually for emeritus and honorary members.
$2500 One time dues payment for life members.
(f) Membership in IBG will entitle standard, life, emeritus, honorary, and student members to the following benefits:
1. Online access to the Society publications, including a reduction in both the annual rate for voluntary subscription to the society publications and the cost of books purchased from the Publisher;
2. Presentation of at least one electronic poster at all international internet conferences sponsored by IBG;
3. Reduced registration rates (compared to rates for non-members) for attendance at Conferences and regional IBG sponsored meetings (but not necessarily IBG co-sponsored symposia of other societies);
4. Free participation in internet question-answer sessions sponsored by IBG;
5. Other benefits as designated by the Board of Directors.
Associate members will be entitled to all the benefits listed above except for the reduced rate for monographs or journal subscription, and book purchases.
Publicado por IBG-Society en 18:16 No hay comentarios:

GSF New Board of Directors

The Graduate Schools of Geosciences and Life Sciences of Utrecht University have developed a Graduate Program on ‘Nature Conservation, Management and Restoration’. Within this program 4 PhD positions are available of which 2 will start by the end of 2015. (Former) Students can apply for this program.
Read this leaflet for more information.

LACEEP provides research grants in environmental and resource economics to Latin American and Caribbean researchers, thanks to the support from IDRC. It provides not only financial support, but also meetings, resource persons, access to literature and opportunities for comparative research on public economics, with emphasis on environmental economics and its relationship with development, poverty, education, health, and others.
The call for proposals for the XIX round of awards has started and the deadline is May 1, 2015.

The program Global Change Ecology (M.Sc.) is devoted to understanding and analyzing the most important and consequential environmental concern of the 21st century; namely, Global Change. Problems of an entirely new and interdisciplinary nature require the establishment of innovative approaches in research and education. A special program focus is the linking of natural science perspectives on global change with approaches in social science disciplines.
More information

Academics and professionals with a geography-related focus are invited to submit abstracts or special session proposals for the CAG 2015 annual conference and meetings, to be held at Simon Fraser University, June 1-5, 2015.
More information

CIRAD (French Agricultural Research Centre for International Development) is recruiting an agronomist specialising in the design of agroforestry systems.
Apply before 15/03/2015
More information

Scholarships are available for undergraduate, master, PhD students, post-doctorate and also for staff members (academic and administrative) to undertake a mobility period or obtain a full degree in Europe. They include a monthly allowance, travel, insurance and participation costs. The current call for applications cover a bilateral mobility from the EU to LA and from LA to the EU.
Applicants are kindly requested to carefully read all the information contained in this document before proceeding to fill and submit the online application form. Deadline: 10th February 2015
More information about this initiative can be found here

You can help to assess the situation of the peoples and ecosystems of the Guiana Shield !
This is an invitation for papers on any theme pertaining to the peoples, ecosystems or socio-ecological systems of the Guiana Shield.
If you are interested in participating, please send an Abstract of no more than 200 words to Janette Bulkan at janette.bulkan@ubc.ca and Katherine MacDonald at katiem@yorku.ca by 15 February 2015.

The Union of Concerned Scientists, is hiring for a few new roles, including that of a paid intern for the Tropical Forest and Climate Initiative Assistant role in our Washington, D.C. office.

Click here to see the invitation to the Workshop on Biodiversity Corridors in the Guiana Shield. The workshop will take place on 21- 23 May 2014 at Iwokrama, Guyana. 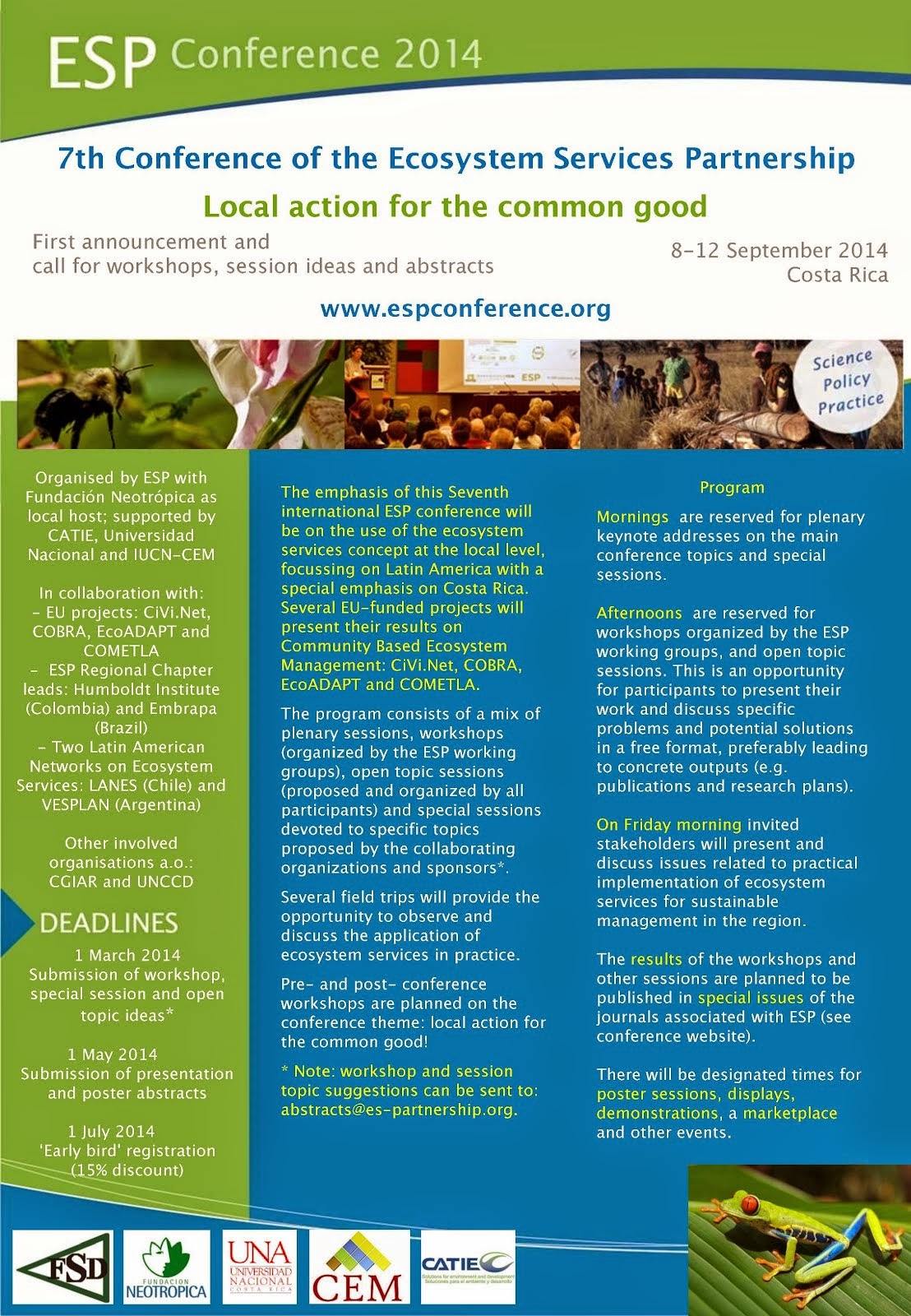 There is a position as Research Assistant available on the Talented Young Scientists Program of the Institute of Geographic Sciences and Natural Resources Research (IGSNRR), Chinese Academy of Sciences.

Special Meeting of the Board 2011
Objective: Designation of the IBG Officers
that will work until the year of the 3rd
Conference of Biodiversity of the Guiana Shield
to be held in Suriname

Letter for membership in IBG.

We are still in the process of organising the legal Chapters.
If you want to show us your interest in joining the International Society of the Biodiversity of the Guiana Shield (IBG), read the description of our policies on membership and dues, please send your contact information to us (described below) as we will contact you soon.

Please send an email at the 2010 researcher that was committed for helping in organising the Country and International Chapters of the Society:

with the following information:

Postal mailing address (usually professional address but could be home address too);

Email address and telephone number (the last is optional);

1. If you pay at the Meetings of the Chapters or the Conferences, you can do so in cash or by check. Each chapter will open an account for the Society

2. Still in process... We will find a way to pay through a secure payment website.